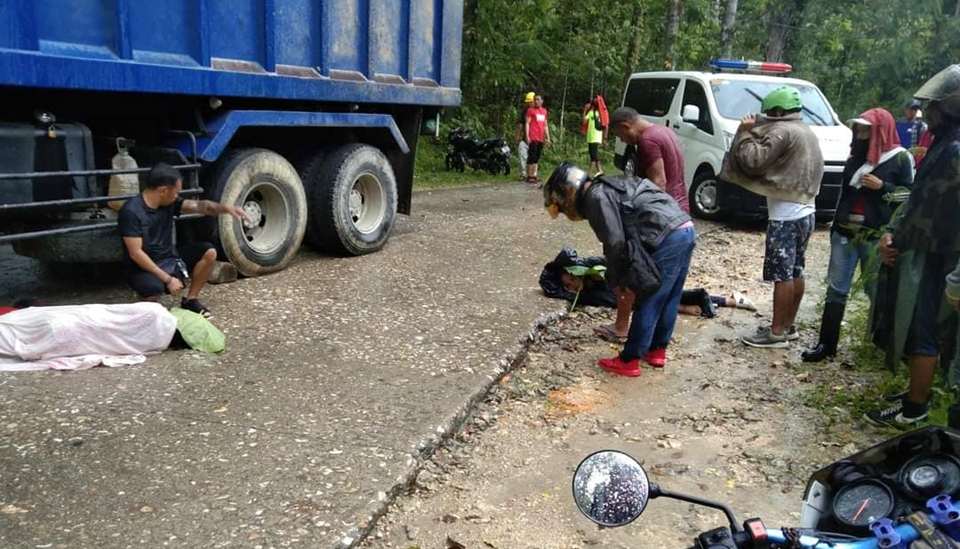 A woman has died while two of her passengers, including a minor, were injured after the motorbike she was riding slammed into a dump truck along a national highway in the town of Sagbayan amid heavy rain on Saturday afternoon.

Staff Sgt. Sagbayan Police Station’s Anthony Vistal said the motorbike driven by Genalyn Lenis, 26, swerved into the opposite lane along a sharp bend in Barangay Sta. Catalina before hitting the truck.

Lenis, pinned by one of the wheels of the truck, died instantly.

Meanwhile, her two passengers were taken to hospital for emergency medical assistance.

The trio attended a wedding in the nearby town of Catigbian before the incident as the truck driven by a certain Gregorio Velso was carrying gravel.

According to Vistal, Lenis’ passengers confirmed that she was driving too fast.

It was also noted that the three women were not wearing helmets during the incident.

Veloso was initially taken into custody but was released after the Lenis’ family decided not to press charges.

Vistal said the parties involved have reached an out-of-court settlement. (A. Doydora)

‘They had their dreams’: Families devastated by Texas truck deaths | American immigration