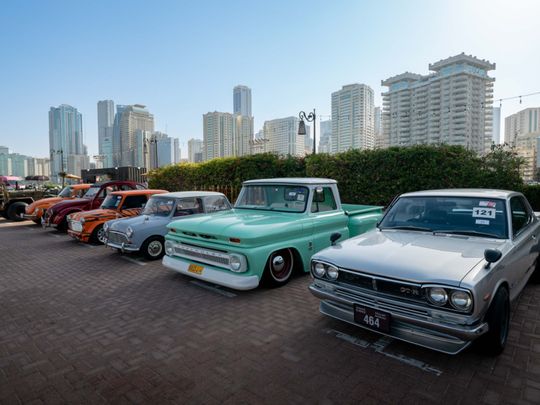 Watch: 800 classic and sporty cars and motorbikes speed up ‘Wheelers Festival’ in Sharjah

Sheikh Sultan bin Ahmed toured the festival to see what attendees had to show, from classic and luxury cars to fast cars and motorcycles, while discussing vehicle details with attendees.

The two-day festival, which ended on Sunday, featured more than 800 cars and motorcycles, attracting car and motorcycle enthusiasts from all over.

The festival held several competitions to select the best participants in each of the 26 categories. There were also a number of awards for riders in various motorcycle categories.

Sheikh Sultan bin Ahmed was also briefed on the latest Sharjah Police vehicles, including the Mobile Media Center, which can provide coverage during major accidents and crises.

Also on display were the force’s escort vehicle for VIP protection, as well as a Spartan armored vehicle used for riot control, combat operations and raids.

Meanwhile, Smart Patrol showed how five vehicle-mounted cameras controlled by the driver can detect wanted people and vehicles with expired registrations. It also has night vision and heat vision, and the patrol even has a drone that can be controlled remotely by the driver. The Patrol’s rear window can become a screen to alert drivers of a traffic accident ahead so they can slow down or change lanes.

Sharjah Police also exhibited an electric bicycle used to secure events and equipped with cameras and a tablet connected to a traffic and crime monitoring system. The bike can run for more than eight hours without charging.