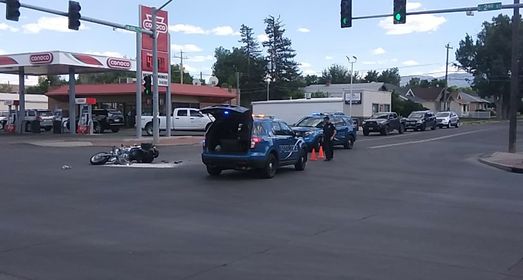 (UPDATE) No serious injuries in motorcycle-vs-vehicle crash on Thursday

Casper police attended the scene of a motorcycle accident on East 2nd and South McKinley streets on Thursday. (Photo submitted)

CASPER, Wyo. – Emergency responders say there were no serious injuries following a collision between a motorcycle and a vehicle at the intersection of East 2nd Street and South McKinley Street on Thursday.

Casper’s Bryan Anderson said he was there when the motorcycle driver was taken from the scene by ambulance with unknown injuries.

“He was punched and transported to Wyoming Medical Center in an ambulance,” Anderson told Oil City News.

Hill told Oil City there was no medical transport. After Anderson relayed his statement, Oil City confirmed to Acting Casper Fire-EMS Battalion Chief Todd Mason that the runner had been transported for verification. Mason agreed that there were “no serious injuries”.

The driver of the vehicle was cited for not giving in, Hill said.

Hill reminds the public to “take that extra second” while driving to watch out for motorcycles.

“Due to the warmer weather, the motorcycles are out. It is a much smaller vehicle; they are harder to see.