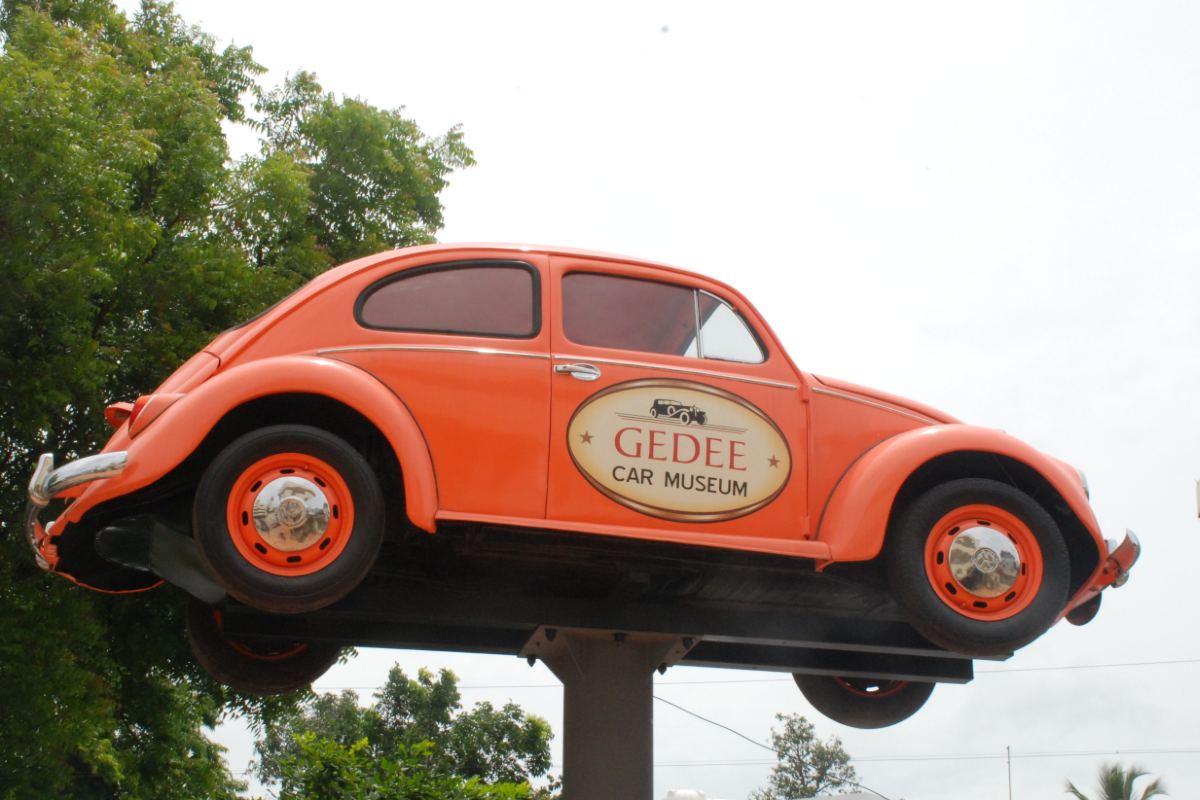 Opened in 2015, the museum is a tribute to the late GD Naidu, a prominent industrialist, car enthusiast, educator and philanthropist, by his son GD Gopal.

Walking down the busy Avinashi Street in Coimbatore, a bright orange Volkswagen Beetle mounted high on a pedestal caught my eye. Turns out that was the entrance to the Gedee Car Museum. I stopped to take a look at the vast array of vintage cars on display in the expansive 20,000 square foot museum. The story of the automobile unfolded before me as I walked down the curved hallway. For a newbie unfamiliar with automotive history like myself, it was a great experience seeing posters and photos illustrating the evolution of the wheel, the automotive industry, and descriptions of each of the vehicles on display.

Opened in 2015, the museum is a tribute to the late GD Naidu, a prominent industrialist, car enthusiast, educator and philanthropist, by his son GD Gopal, a museum trustee. Gopal continued his father’s hobby by not only completing the collection but also maintaining most of the cars in motorized condition.

If you have a fondness for automobiles and their fascinating history, this automobile museum is a destination not to be missed. For car enthusiasts, it can be overwhelming to gaze at the 60-odd cars on display highlighting the technological transformations of the automotive industry – from engine and shaft to body, seat and tire construction – with the merit of the inventors. Eight special cars were donated by vintage car enthusiasts and automotive enthusiasts who wanted to share their prized possessions with the general public. What makes this museum interesting is the mind-boggling wealth of information provided on cars, designers, engineers, and manufacturers.

Walking through the museum, I learned all about automobiles and cars, including facts like how the Sumerians invented the wheel in 3200 BCE; how the Egyptians introduced spoked wheels in 2500 BCE; how the Pharaoh Tutankhamun of Egypt raced through the desert dunes at high speed in a chariot.

The collection is divided into a few sections. In the Unique Car section, I found the Benz Patent Motorwagen, considered the world’s first three-wheeled automobile. It had a gasoline-powered, single-cylinder, four-stroke internal combustion engine and was the very first automobile patented by German Karl Benz. There is also the Ford T (first mass-produced car in the early 1900s) and the Morris Mini, considered a forerunner of modern cars, thanks to the front-wheel-drive layout. The Volkswagen Beetle takes pride of place. Considered “a car at the price of a motorcycle“, it cost Rs 850 at the time. Another impressive car on display is the Citroën 2CV. It was designed to carry two French farmers and a basket full of eggs across a plowed field.

A replica Benz Patent Motorwagen
The cars are further classified according to their country of origin such as British, German, Japanese, French, Spanish and American. Other spectacular vehicles on display include the Rolls-Royce 20 and American classics like the Dodge Victory Six (the first all-steel body) and the luxurious Cadillac limousine, which is the official car of the American President. Also on display is the British Austin 7, nicknamed Baby Austin, one of the most popular economy cars of its time.

Ford’s car for the masses
Another highlight of the museum is the 1921 Rudge Multi 500cc motorcycle which belonged to Naidu. There are also old black and white photos of Naidu taking classes, holding workshops, and interacting with car tycoons.

Each car is linked to the history of the world and has a story to tell. For example, the tiny Bubble Cars of the 1950s and 1960s, designed as easy-to-drive and inexpensive means of transport, became popular in post-war Europe when fuel prices soared due to the Suez crisis in 1956. This car can only accommodate the driver and one passenger. There are no side doors, and the front of the car also serves as an exit.

Bubble Car and Micro Car
I found the connection between cars and Hollywood equally fascinating. For example, a Volkswagen Beetle called Love Bug has been featured in at least six films.

The love bug
We also took a look at the Toyota Sera, a two-door, four-seat coupe notable for its gullwing doors that tilt up and forward when opened. The Sera has also featured heavily in TV series and movies, most notably in the Tamil film Padayappa, featuring Rajinikanth; it would be one of the actor’s favorite models.

Toyota Sera, which featured in Rajinikanth’s Padayappa
The museum also has a royal connection to the Hispano Suiza H6B, the only one in the country that once belonged to the Maharaja of Mysore. A huge poster depicting Maharaja Jai ​​Singh of Alwar highlights imported cars owned by Indian royalty. An interesting excerpt concerns the phrase “Make a Mysore”. The story goes that Rolls Royce was so accustomed to the Maharaja of Mysore, Krishna Raja Wodeyar IV, ordering cars in batches of seven that it coined the phrase “Make a Mysore” to indicate the delivery of a bulk order.

As I left the museum, I reflected on how the evolution of the automobile is represented in this magnificent collection. I’m sure visiting this exhibit will inspire and inspire young minds to think differently and challenge themselves to innovate.

All photos by Susheela Nair.

Susheela Nair is a freelance writer and photographer specializing in food, travel and lifestyle. She contributes articles, content and images to several national publications, in addition to organizing seminars and photo exhibitions. His writings cover a wide range which also includes travel portals and guides, brochures and coffee table books.