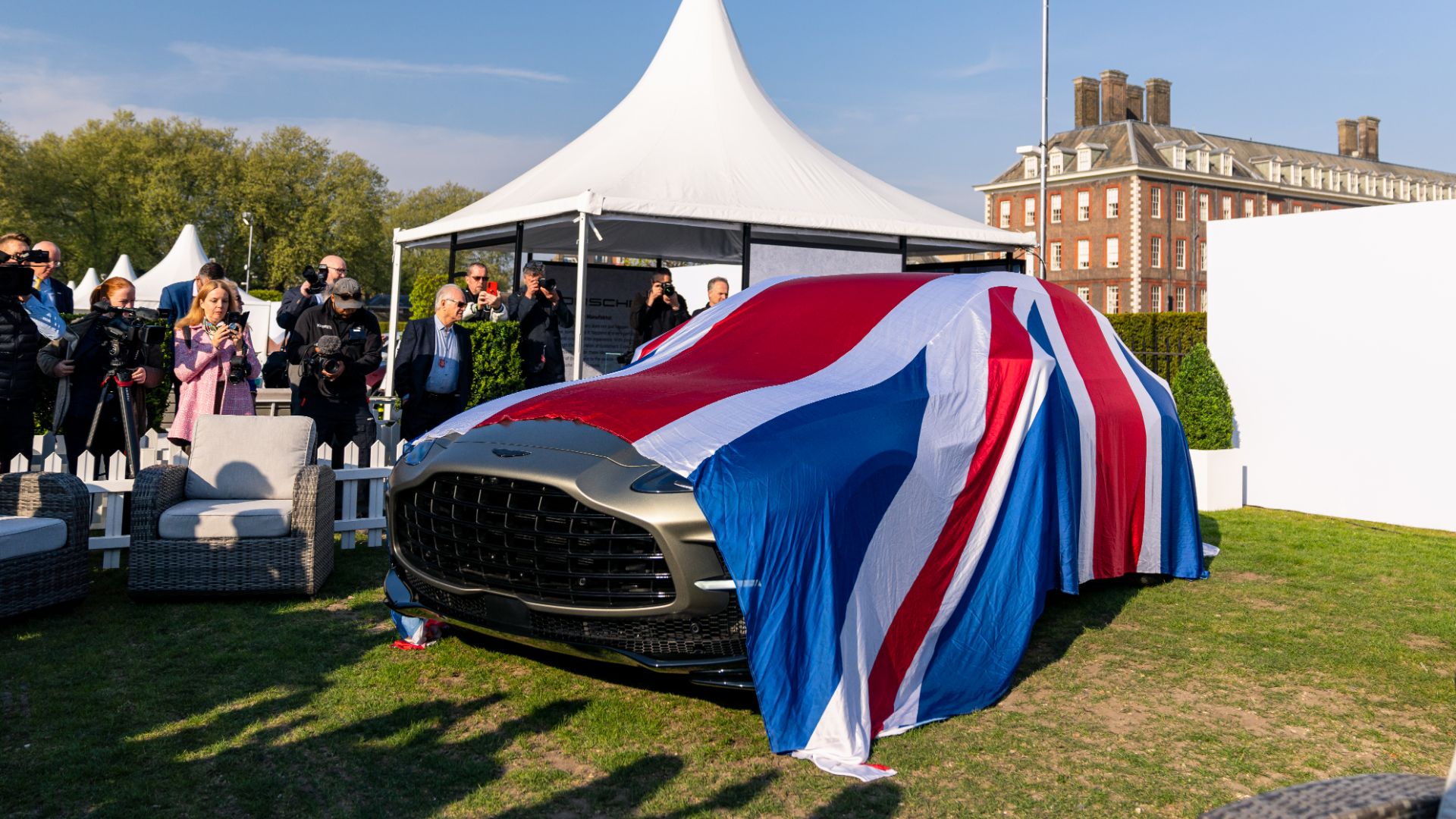 If you love exotic cars, people watching or drinking copious amounts of champagne, Salon Prive London is for you. The UK’s fanciest motor show takes place on the manicured lawns of the Royal Hospital in Chelsea from April 21-23 – and VIP access meant I was the first to enjoy the bars. Sorry, cars…

With everything from coveted classics to the latest supercars, Salon Prive caters to every automotive taste. It also witnessed several UK debuts, including the world’s fastest SUV, the world’s lightest hypercar and the best thing on three wheels since Del Boy’s retirement. Have a drink and let’s go for a guided tour.

With a top speed of 193 mph, the new Aston Martin DBX707 is the fastest SUV on sale – well, until the arrival of the Ferrari Purosangue in 2023. Its 4.0-litre twin-turbo V8 delivers 707 hp, 0-62 mph in 3.3 seconds and a soundtrack like rolling thunder. On the right road, the DBX flagship also makes a convincing impression of a low-slung supercar. Here is an excerpt from our recent review:

“The new AMG-sourced wet-clutch transmission is key to the 707’s added urgency. Where the standard DBX’s torque converter housing might hesitate to engage, this setup is fiercely focused, with shifting via the long metal paddles.And when you’re not doing your best Sebastian Vettel impression on incredible roads, it’s also smooth and GT-worthy in automatic mode.

Read our review of the Aston Martin DBX707

Described as “the antidote to a daily driver”, the Morgan Super 3 is bonkers and brilliant in equal measure. Where its 3-wheeled predecessor used a motorcycle V-twin, the Super 3 is powered by a 120hp three-cylinder Ford engine. Driving the single rear wheel via a Mazda MX-5’s manual gearbox, it scurries to 62 mph in 7.0 seconds. At £41,995, it’s also one of the most affordable cars at London’s Salon Privé.

The Morgan is equally eccentric inside, as designer Harvey Fulford explained: “The dashboard is a strange balance between different eras. The digital gauges have aluminum surrounds that look like they came from an old airplane. And the joystick switches underneath look like something out of a retro arcade game. Flight goggles are optional.

Read our preview of the Morgan Super 3

A new Ferrari is always a bit special, especially when it boasts 830 hp and styling inspired by the classic 250 LM. The 296 GTB features Maranello’s first V6 engine (the Dino 206 GT was never badged Ferrari, remember), which is paired with a 167bhp electric motor for quiet, emissions-free driving around town. Alternatively, spin the manettino into Qualify mode and blitz to 62 mph in 2.9 seconds. Top speed is 205 mph.

Priced at £241,550 – before options, naturally – the 296 GTB slots into Ferrari’s lineup above the F8 Tributo and below the SF90 Stradale. A GTS convertible has already been announced, and a lightweight Pista-style version, taking inspiration from the 296 GT3 racer, is likely on the way. This Giallo Modena example would suit us very well, thank you.

Read our review of the Ferrari F8 Spider

What is this, another new ferrari? The Daytona SP3 is the latest limited edition Icon model, inspired by 1970s sports prototypes and making its UK debut at the Salon Privé. Only 599 copies will be made, priced at £1.7million each. And before you ask – yes they are all booked.

If the 296 GTB hybrid is the future, the Daytona is a glorious homage to the internal combustion past. Its naturally aspirated 6.5-litre V12 is shared with the 812 Competizione and runs at 9,500 rpm. Zero to 62mph takes 2.85 seconds and top speed is 211mph, with the aero-sculpted body generating 230kg of downforce at 124mph. Hopefully they are motivated rather than diverted as investments.

Read our review of the Ferrari 812 GTS

The appetite for restomod classic cars shows no signs of slowing down. This ‘reinvented’ Austin-Healey 100 from Coventry-based Caton is the latest, limited to 25 cars and priced at £474,000. It’s still a “Big Healey”, but cosmetic changes include a redesigned grille, LED headlights and new front fenders, as well as the removal of bumpers, exterior stitching and chrome trim. Inside, the wood and leather interior looks reassuringly retro, but a pair of hidden USB outlets let you charge your phone.

An upgraded 3.0-liter four-cylinder engine develops 185 hp and 195 lb-ft of torque, so performance will be snappy. The leaf-sprung rear suspension is tightened with pink-seal anti-roll bars, while the non-ABS brakes feature larger discs and calipers. As for the steering, it is still not assisted for maximum feedback. Expect a review later this summer.

Read our preview of Healey by Caton

Salon Privé still has its fair share of “boutique” hypercars – the kind of exoticism that makes Lamborghinis look unremarkable. The Tushek TS900 Apex was first unveiled at the Royal Hospital and only 36 cars will be made, plus 12 examples of the track-only TS900 Racer Pro. Want one? You will need a reserve of £1.25 million.

With 1,350 hp and an empty weight of around 1,350 kg, the TS900 Apex achieves a “perfect” power-to-weight ratio of 1:1. Its hybrid Tushek Direct Electric Drive (TDED) system is also claimed as “the highest power density transmission in the world”. Tushek was founded in 2008 by Slovenian racing champion Aljosa Tushek, and the TS900 has apparently been in development since 2008.

Read our roundup of the rarest supercars

Don’t wait, come back! Granted, a Korean compact crossover doesn’t pack the emotional punch of an Italian supercar, but believe us, the Genesis GV60 looks great in the metal. Making its European debut at Salon Privé, the GV60 is the first electric vehicle from Hyundai’s luxury arm. Highlights include exterior mirrors with camera and a “crystal sphere” on the dashboard that “intuitively informs the driver of oncoming driving conditions”. So okay.

Based on the same platform as the Hyundai Ioniq 5 and Kia EV6, the GV60 matches the new Tesla Model Y. Prices start at £47,005 for the Premium model and extend to £65,405 for the flagship Sport More. The latter has 435 hp and a fully charged range of around 290 miles.

If your idea of ​​an off-road supercar is a safari-spec Porsche 911, prepare to think again. Designed by Ian Callum – of Aston Martin and Jaguar fame – the Hunter T1 has been described by Prodrive chairman David Richards as “the Ferrari of the desert”. For around £1.5million, the Banbury-built racer is your ticket to the Dakar Rally.

Powered by a 600bhp 3.5-litre Ford V6, the Hunter can blast to 62mph in under four seconds and reach 186mph. A massive 480 liter fuel tank gives it enough range to drive for hours through the desert. Or potter on the lawn of Chelsea Hospital. We want one.

‘Brilliant’ son, 19, dies after combine accident with his motorbike