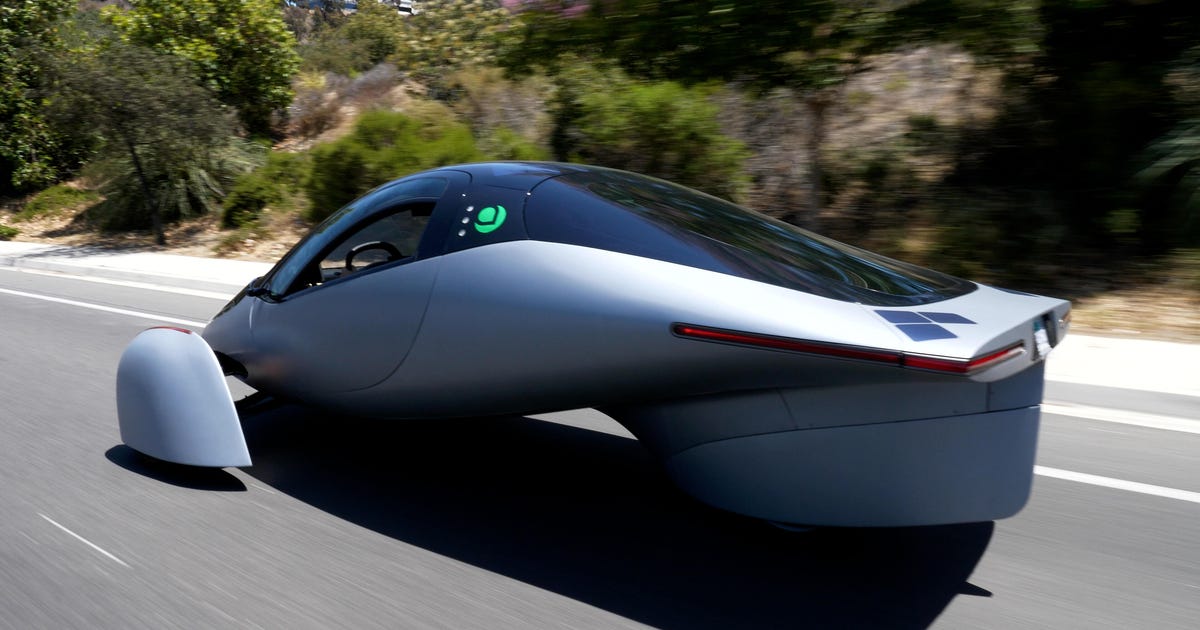 Solar cars are coming, but at what price and are they right for you?

A practical solar car has been the stuff of science fiction, mostly relegated to proofs of concept, but lately that has changed as three credible manufacturers are bringing them to market. Long-range EV buyers who think these cars will allow them to completely cut the cord will be disappointed, but those with a realistic view of their driving needs might be excited.

All of these early leaders still embrace plugged-in charging, but rely on solar charging as a front-line method to cover most mainstream driving. Whether this is true will depend on each driver’s mileage needs and access to sunlight; clean car nuts who like to keep their car parked or covered need not apply.

The Lightyear 0 bills itself as the most sophisticated of the first solar cars, and for a quarter of a million dollars it had better. Don’t worry, the next two cars I show you cost about the same as the sales tax on this one.

Lightyear says the 54 square feet of solar panels on top of their car can harvest up to 45 miles of range per day in addition to around 390 miles of total battery range (per European WLTP test cycle , which tends to be bullish relative to US ratings). Of this range, 320 miles can be covered in about an hour when plugged into a DC fast charger.

The Lightyear 0 weighs just under 3,500 pounds, which by today’s standards is slender, especially for a car carrying a heavy battery pack that typically weighs 500 to 800 pounds. Part of this lightening comes from the use of simple and compact wheel motors, which is a given in the solar car sector.

Only 950 of these cars are planned for initial production, with sale limited to the UK and parts of the EU.

At the other end of the price range is the Sono Motors Sion at around $30,000, an extrapolation since this car is also not slated for the US market. The Sion offers 190 miles of total range and 70-150 miles of solar range per week, another example of the rather tortured estimates of dual-range solar car makers, due to the two disparate ways their cars get energy. electric energy.

The Sion is plastered in solar panels, not just on the upward-facing surfaces and, as a result, thumbs its nose at style prices. When you need to plug in a Sion, a DC fast charge will cover around 80% of its 190-mile range in around 30 minutes.

Like several non-solar EVs, the Sion boasts the ability to power other things, like the EVs that Sono’s footage brazenly suggests could be stranded without solar.

Sono recently announced that it would entrust Finnish subcontractor Valmet with the role of manufacturing partner, placing the Sion in the same hands that have built many years of Boxsters and Caymans, as well as several current Mercedes models. No garage band there.

If the Aptera vehicle sounds familiar to you, that’s because it’s been the next big thing for at least 15 years. Now in solar electric form, it (yet) deserves another look. You’ll love or laugh at its wingless airplane styling and notice that it’s a three-wheeler. But Aptera says it all helps it soar through the air using as little as 30% of the energy of an electric or hybrid vehicle.

Its unconventional, light and slippery design creates a virtuous circle: the vehicle needs a smaller and lighter battery which, in turn, increases the lightness of the vehicle, allowing a significant state of charge to be achieved via the sun. . Aptera uses an interactive mapping tool to illustrate how much solar driving you can expect. On top of that, you can configure an Aptera with battery options ranging from 250 to an almost unbelievable 1,000 miles.

The vehicle can hold two people, and it helps if they are good friends: the cabin with pontoon fender mounts is comfortable (at least it’s not a tandem) although it has a bridge substantial rear storage reminiscent of a Jaguar E-Type.

Notice that I referred to the Aptera as a vehicle, not a car, as that is a key distinction. To the humorless eyes of your local DMV clerk, the Aptera is a motorcycle, or perhaps an “automatic cycle”. You would need to check the motor vehicle rules in your state, but at least you shouldn’t need a helmet because the thing is fully enclosed. However, you may need a motorcycle or three-wheeled vehicle endorsement. And note that, as a non-car, the Aptera doesn’t have to meet the same safety standards as cars, like having airbags.

Of the three cars I showed you, this is the only one made and sold in the United States, ranging from around $26,000 for 250 miles of range to around $50,000 for one with an amazing 1,000 mile projection . In a way, the Aptera makes the most sense because it’s so completely distinct from any other EV that it pleads to be possessed with one.

While you’re making up your mind about solar cars, here’s what I think: real-world performance feedback is going to be very important, because it’s a new type of charging that almost no driver will has experience.

That said, self-charging does something powerful: it allows an electric vehicle to potentially outpace the convenience of a gas-powered car rather than just trying to come close. This fits perfectly with my belief that the best charging is not the fastest but the most persistent and seamless.

I suspect electric vehicle buyers are going to be pretty skeptical of solar cars, or they might break the reverse path and embrace the concept, thanks to the millions of residential solar installations in the United States that have set the stage for technology.

Solar cars are an attractive proposition for the tuner who realizes that because almost everything is going electric, almost nothing will work when the grid is down. It would be nice to know that even when that happens, you still have a working car.

Finally, I have concerns about the limited solar range these cars offer at a time when we are about to see massive growth in conventional charging infrastructure; This would seem to create a risk that the solar proposition will get lost in a sea of ​​conventional charging that could relegate solar vehicles to the most serious environmentalists or tech dabblers.

That said, there’s an undeniable elegance to a solar electric car, so I’ll check them out for you.