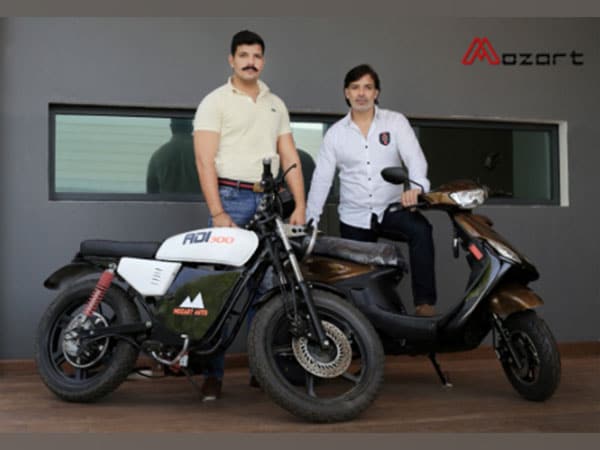 Mozart Automobile launches first ever Adi 300 electric bike and MM pro scooter made in India at amazing price of Rs 49,999

New Delhi [India], Oct 3 (ANI/GPRC): Two-wheelers and three-wheelers are currently dominating the Indian electric vehicle space as they are the most affordable compared to electric cars. In the two-wheeler market, electric scooters have been able to penetrate to some extent, thanks to start-ups and a few big names have entered the field. However, the motorcycle segment is still dominated by conventional gasoline models.

With a sleek new logo that includes a compilation of two ascending triangles highlighting a capital letter “M” in red.

The new logo, designed in-house, emphasizes acceptance by the masses and also highlights the value of saving the environment by bringing an inflection in the field of electric vehicles.

Mozart Automobile is also venturing into the segment with its ADI 300 e-bike which is the first ever made in India.

India’s electric two-wheeler market is expected to cross 20 lakh units by 2025. While zero-emission scooters are sure to play a major role in this growth story, the ADI 300 e-bike has the potential to play a key role with its speed of 120 kmph and a range of 250 km.

The bike is extremely sleek with a sleek look and is expected to launch in the coming month.

According to Mozart Automobile, it will be launched by Diwali, 2022 and is expected to be on the road in November 2022.

Furthermore, there are a host of new models waiting to be introduced in the Indian market by Mozart Automobiles in 2022 and forthcoming, including fully bare faired, high-speed long range.

Mozart Automobile also launched the new exclusively designed Mozart MM Pro electric scooter model towards the end of September, a bike made in India with an approach that will help the brand increase its value by adding to the eco-friendly group and also adding a layer to the approach to India in the Ev sector and manufacturing in India as well. The scooter is available in vibrant colors of blue, black-brown, green, orange, yellow, red and others and is priced at just Rs.49999.

This story is provided by GPRC. ANI shall in no way be responsible for the content of this article. (ANI/GPRC)

(This story has not been edited by Business Standard staff and is auto-generated from a syndicated feed.)

Legendary Race Cars May Look Goofy But Are Lots Of Fun