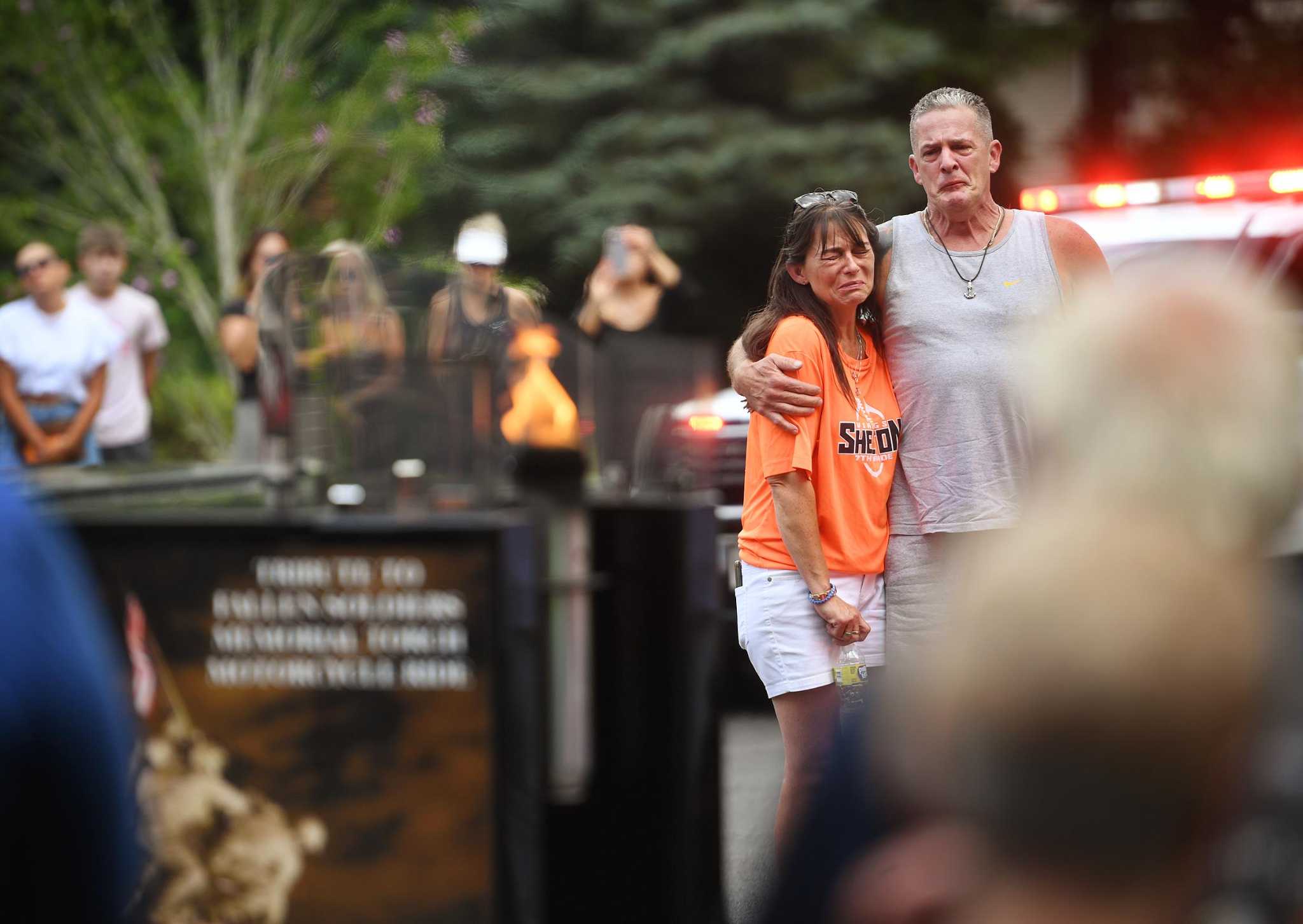 SHELTON — Xavier Sandor, who took his own life in April while deployed in the US Navy, was remembered on Tuesday as kind, generous and loving, beaming with pride every time he put on the uniform .

Family and friends gathered at the Timberlane Drive home of Sandor’s parents as the Tribute to Fallen Soldiers Memorial Torch Motorcycle Ride escorted the memorial flame – first lit July 9 in Eugene, Oregon – to pay their respects in Xavier’s service and sacrifice.

“Thank you for honoring our son,” Xavier’s father, John Sandor, told the gathering. “I knew it was going to be a tough day, but I was looking forward to it. We don’t want it to be forgotten.

“It’s such a great honor,” he added, tears streaming down his cheeks. “Thank you for making the trip. It’s a real honor for you to come to Shelton and honor Xavier. It means a lot.”

“To know how much Xavier was loved,” his mother Mary Graft said, her voice cracking. “Thanks a lot.”

Xavier Sandor graduated from Shelton High in 2021, where he served as the football team’s starting quarterback. His parents said he chose to join the Navy, following in the footsteps of his grandfather and uncle, Pat Wynne.

He then went to boot camp in Great Lakes, Illinois, earning the green light as a chief yeoman and earning his sniper certification. He then went to School A in San Antonio, Texas, where he graduated as a master-at-arms.

“His first duty was on the USS George Washington, which was in drydock in Virginia,” John Sandor said. “Within three months, he’s gone.”

Xavier was 19 when he died on April 15, Good Friday, just months after his deployment on the nuclear-powered aircraft carrier. His death was part of a group of suicides aboard the ship in drydock. Her parents have spent the past four months not only coping with grief, but also struggling to find out why it happened.

“He was happy, a good boy,” Graft said. “His group of friends, everyone misses him. He was that happy person. He made people happy and everyone loved Xavier. Three months in that shipyard, and he commits suicide. I can not understand. The rest of our lives we must go on without our son.

Sandor said the Navy’s investigation into the “non-combat” death is continuing and could take another eight months before there are answers.

“I don’t know if we’ll ever get the answers we’re looking for,” Graft added. “We know what happened, but who did he go to talk to? Who was available? He spoke to someone. What was said?”

Sandor said Xavier often complained about the state of the ship, but never made statements that would have led him or Graft to believe he was so emotionally upset.

“This ship was no place for sailors to live,” Sandor said. after he and Graft visit the ship after their son’s death.

Sandor said Xavier worked night shifts, 12 hours from 5 p.m. to 5 a.m. During the day, he said he was told about the fumes and smells from the work in progress that kept Xavier from resting, so he would walk a mile to his vehicle. to try to sleep.

“If I knew it was that bad, I didn’t, and he really didn’t say anything,” Sandor said. “He said it was awful but nothing to the point of what he did to himself.”

Graft said Xavier was alone and lived in his car when not working. He would drive eight hours home to Shelton to spend time with family and friends, and Sandor said he would rest and return to the ship.

The Navy has since moved hundreds of sailors off the shipaccording to the media.

“It’s a bit too late,” Sandor said. “I know a lot of the command structure is telling them to suck it up. But they are young sailors out of high school, for the first time away from home in addition to training camp and school A. And then they are thrown on a boat which is uninhabitable.

Not having the answers they seek adds to their emotional torment, he added.

“Something bad had to happen for him to do this to himself,” he said.

“He said he was sorry,” Sandor said.

From that moment, his parents began a frantic attempt to reach Xavier and ask someone to watch him. But it was too late, he said.

The couple then traveled to Virginia and then it was days before they were allowed to view their son’s body.

“It’s been tough, but I don’t want her story to be swept under the rug,” Sandor said. “Someone has to be held accountable. Something has to be done to get these young sailors in and if they need help they will have someone to talk to. They need to have someone to who to talk to.

Wynne opened up about her nephew’s strength of character and how his loss devastated the whole family.

“We love him so much. He was such a strong person, a loving person,” Wynne said. “It’s hard, but we have to keep going, to keep his memory alive.”

“We are doing our best to operate as best we can. Some days I’m just proud of myself just to get out of bed,” he said.

“We are all very grateful to be here to honor your son,” said Tribute to Fallen Soldiers organizer Warren Williamson.

Tuesday’s ceremony began at the intersection of Timberlane and Eagle drives, where traffic was stopped and Shelton Fire Department ladder trucks hoisted the large American flag above the Tribute to Fallen RV. Soldiers, who drags the commemorative flame behind him.

Motorcyclists and Gold Star mothers rose to their feet as Amazing Grace played in honor of Xavier.

Afterwards, the mobile home and motorbikes drove to the front of Sandor’s house where Williamson spoke about the tribute to fallen soldiers in the Northwest and made comments about Xavier before presenting the family with a plaque and portrait of Xavier with his parents.

“You were lucky enough to call him a friend,” Williamson said of Xavier. “He was a kind, gentle, caring and generous person who will be missed every day by his family, friends and fellow sailors. May we never forget Xavier Sandor’s service and sacrifice.

Sandor said the family was proud of their choice to continue what had been a family tradition by joining the Navy.

“I can see it’s scary at first,” he said, “But whatever happened in those three months, a strong, intelligent young man came out of this world.”

Xavier’s parents said many agencies have reached out to help, but the couple say it’s “too soon.”

“It’s our time to mourn,” Sandor said. “We kind of have to go through this day to day. It hasn’t even been four months. In my mind, he’s still coming home, he’s just on the ship, deploying, and he’ll be coming home. I know I’m tormenting myself, but that’s all I have at the moment.

“Xavier was a Shelton boy,” Graft said. “Everyone who knew him loved him.”