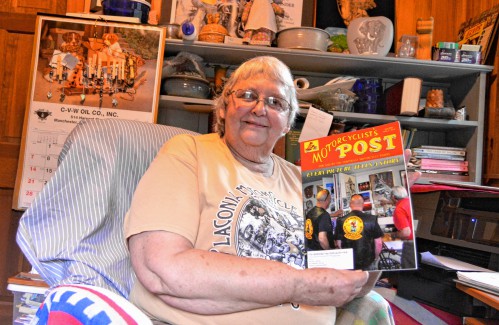 From an early age, Francestown-born Sylvester Roper displayed remarkable mechanical ability, building a model steam engine when he was just 12 years old. Roper held numerous patents, some on sewing machines, machine tools, ovens, slide guns, and fire escapes. Some of these inventions may have changed the world or at least made it safer and more interesting. He was always interested in steam, having built as many as 10 road vehicles between the years 1860 and 1894.

In the world of firearms, Roper is among the top 100 contributors thanks to his innovations in shotgun design. During the Civil War he was at Springfield Armory, Springfield, Mass.

The circa 1867 steam velocipede, which means “quick feet”, was advanced for its time, perhaps 30 years ahead of its time, with a double twist grip throttle. A rearward twist of the handle activated a chain of iron balls which actuated the front wheel spoon brake and a forward twist advanced the throttle. The machine had foot pegs and no pedals. Roper called it self-propelled. The term motorbike/motorcycle didn’t exist then, and the Smithsonian now owns the original machine.

The twist grip throttle was reinvented by Glenn Curtis several years later and was also put into production by Hendee Mfg. Co. on Indian motorcycles of 1904 and later.

It must have been very difficult to test one of these vehicles, as the road conditions can only be described as pitiful.

As we all know there have been many evolutions in the way we use/produce energy. Roper used steam, then came the gasoline combustion engine, and now some are promoting electric motorcycles. Who knows what the future holds for us?

Roper has been arrested multiple times. Family tradition holds that his niece Rosa Frances Colburn of Francestown was once arrested with him. People were annoyed and horses were afraid of these machines, but the police still had to let him go because no laws were broken.

Roper’s 1894 Columbia bicycle fitted with a steam engine could reach 40 mph. Several of his light carriages and velocipedes were exhibited and raced against horses at fairs and Roper’s machines always won.

For many years Roper lived and worked at 299 Eustis St., Roxbury, Mass. His son Charles was also an inventor, and the two sometimes worked together. Sylvester and Charles had two steam launches, named Pickerel and Toothpick on the Charles River in Boston.

As past president of the Francestown Improvement & Historical Society (FIHS), I am always interested in promoting historical and genealogical interests. My research on the life of Sylvester Roper has been fascinating. During this time, I had the opportunity to meet David Roper of Team Obsolete who is the only American to have won the Isle of Man TT, and who shared his genealogy with me. He is a four-times distant second cousin of Sylvester Roper.

Many are researching Roper. David D. Brodeur of Manchester, Mass., has done a significant amount of archival research and has spoken about Roper to audiences in Francestown, as well as at the Larz Anderson Transportation Museum in Brookline, Mass.

The annual theme for the FIHS Labor Day Parade in 2012 was “Inventions and Discoveries”. The extended family of Harry and Ellen Putnam got to work honoring their descendants as well as Sylvester Roper, who was inducted into the Motorcycle Hall of Fame in 2002.

Andrew Droubat of Amherst, New Hampshire composed the “velocipede” for the parade float. The machine now resides as a garden ornament which can be seen when traveling Bennington Road, Route 47 in Francestown. Some acknowledge Roper’s influence while others just want to know more about him.

This article is reproduced with the permission of the author. It first appeared in Motorcyclist’s Magazine in June 2015.