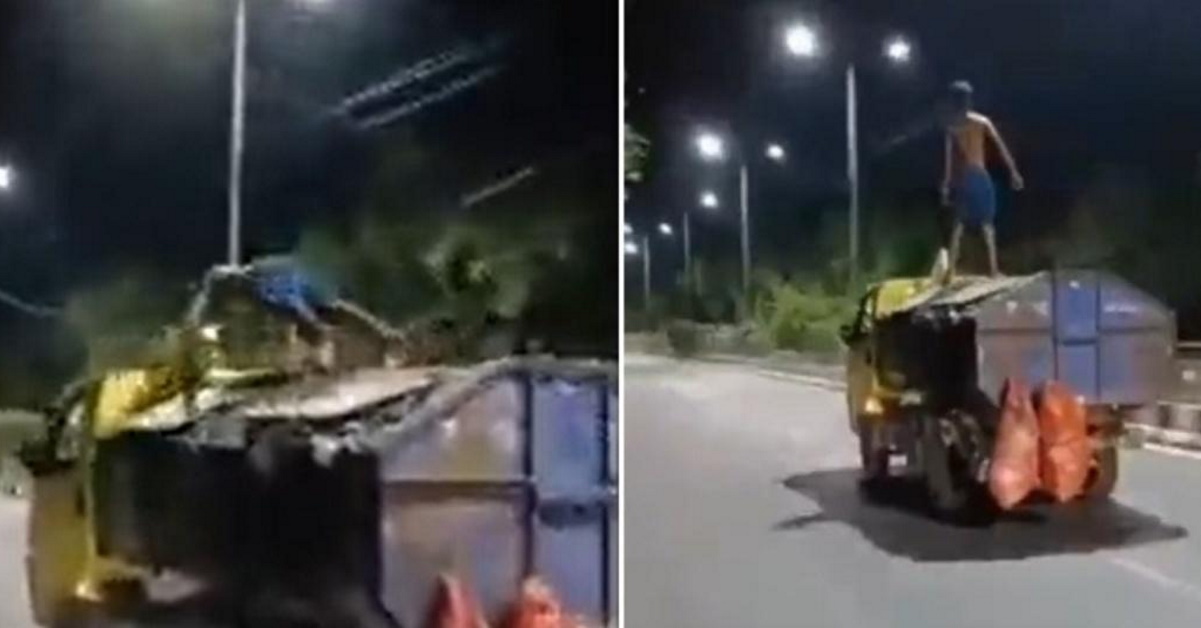 It’s become a trend to do weird or unheard of things to go viral on social media. While doing such antics can sometimes be fun, it can also be fatal and preventable. One such silly antics caught the eye when a video of a man doing push-ups on the roof of a moving garbage collection vehicle went viral on social media. However, the video had a sad ending as the man fell while performing the unwanted stunt and suffered serious injuries to his body.

The example discussed here is from Gomtinagar, Lucknow, where a man was performing push-ups and standing dangerously on the roof of a moving refuse collection vehicle in the empty streets overnight. In the video, the man can be seen standing up after performing push-ups on top of the vehicle. However, after a few seconds, the man fell from the top of the moving vehicle. After a small transition in the video, we can also see the disturbing images of the man showing bruises all over his body.

Shared by the police

The video was shared by a cop named Shweta Srivastava on his Twitter account, which went viral and garnered over 2.65 lakh views. In the caption of her post, the cop mentioned that this video is from Gomtinagar, Lucknow where this man was trying to be Shaktiman (a fictional Indian superhero). However, due to his careless frolicking, he now suffers from bruises and won’t even be able to sit for a few days.

She concluded her message by advising people not to perform such dangerous stunts, with the statement “Shatiman Nahi, Buddhiman Banein” (don’t be a budding superhero, but be reasonable enough not to perform stunts too dangerous). The visuals of the man with his wounds on his body are disturbing, which is why a lot of the wounds are covered in blur.

Apart from the general opinions, the post also got a lot of comments from netizens. While some laughed off these silly antics of the man, some also pointed out the painful circumstances people can suffer from doing such antics. Some even mentioned that it has become a stupid and dangerous trend to flout civil and traffic laws to become “famous” on social media. At the same time, some even showed sympathy for the man who suffered the injuries.

Cops are now using viral videos to issue challans. This is not the first such incident in Ghaziabad where offenders have been tracked using video footage. In the past, two girls doing stunts on Royal Enfield motorbikes and youngsters doing stunts on Maruti Suzuki Vitara Brezza have received a challan from the police based on viral videos.

Doing any kind of stunts on public roads is illegal and offenders can even go to jail and pay massive fines. Doing stunts on public roads can get you to a place for a variety of reasons. If someone wants to practice stunting or record videos, it should be done on private property such as race tracks and even farms. Also, it should be noted that such stunts are extremely dangerous.

A children’s musical and classic cars

(UPDATE) No serious injuries in motorcycle-vs-vehicle crash on Thursday