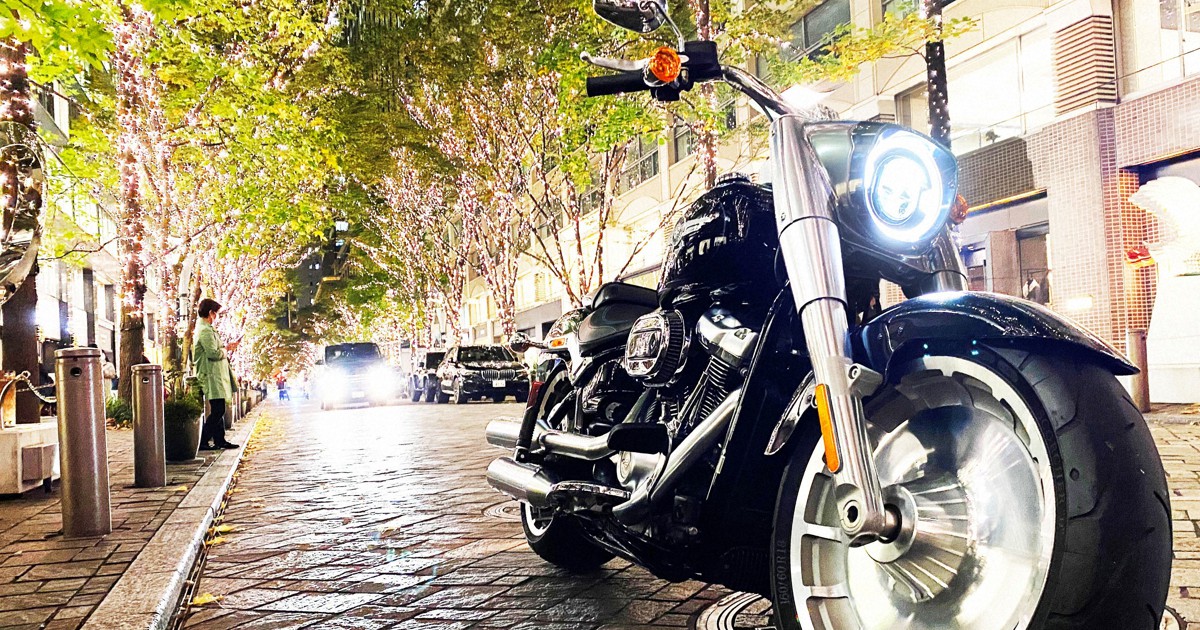 Many places across Japan are lit up for the holiday season, and central Tokyo is no exception. While the air is getting colder here, Tokyo luckily only has a few snowy days a year, making the capital region a biker’s paradise even in winter. So get on your bikes, turn on your headlights and let’s see three of the most dazzling illumination events in the Japanese capital.

These spots aren’t particularly geared towards bikers, but motorbikes definitely make your sightseeing easier than driving or taking the subway. As I wrote about in Japan Motorcycle Diaries #1, parking is limited and expensive in central Tokyo, and these places are usually crowded with cars during the festive and scalloped season. But bikers can easily get around and there is a chance to stop for a moment to take pictures. That said, make sure you don’t block traffic or anyone else.

The annual illumination of Naka-dori Street in Tokyo’s Marunouchi district near Tokyo Station began on November 10 this year and will continue until February 19. In its 21st iteration, more than 340 trees in the area around the 1.2 kilometer street will be illuminated by some 1.2 million LEDs. Although Marunouchi is generally known as a financial district with high-rise office buildings, Naka-dori Street’s tree-lined stone sidewalks, trendy shops and cafes give it a very different feel to the streets surrounding.

In the Minato district, Keyakizaka Street, next to the Roppongi Hills complex, turned on its lights on the same evening, and they will be on every night until December 25. a very bright punch. It is definitely worth a look. Unlike many other illumination events in the city, Keyakizaka Street is almost entirely done in blue and white LEDs, creating a distinct atmosphere. Plus, the proximity to Tokyo Tower means you can spice up your lighting shots with the iconic landmark in the background.

Around 150 zelkova trees along Omotesando Avenue between Omotesando and Harajuku stations will be adorned with around 900,000 lights from December 1 to 29. This avenue is also one of the trendiest in Tokyo and the widest among the three illuminated roads mentioned here. So you might find a place to park your bike nearby to stroll around the neighborhood, including the famous Takeshita Street just a few blocks away.

If you’re unfamiliar with Tokyo’s geography, I highly recommend locking your smartphone to a phone holder so you can use a navigation app. The roads in the city center are, it must be said, complex. Moreover, these three spots are popular with Tokyoites as well as tourists. So if you are wary of crowds, I have another place for night geeks.

And this place is an area of ​​the Shiodome district of Minato Ward called the “Italian Quarter” by some photographers. It was so nicknamed perhaps because the cobblestone roads and square, an Italian restaurant and the stone columns in front of one of the buildings are reminiscent of Rome. If you want to get there, plug “JRA Shiodome” into your navigation app. It’s the majestic colonnaded building, and it houses an offsite horse racing betting office of the Japan Racing Association (JRA). I agree that “Italian quarter” sounds much better, but alas it’s just a nickname, so the JRA office is a safer bet to take you to this little slice of urban nighttime beauty.

We received a question from a reader regarding the motorcycle engine displacements available to foreign tourists in Japan with an international permit.

The international driving license based on the Geneva Convention on Road Traffic of 1945 has only one class of motorcycles, regardless of displacement. However, there are some cases in which international permits are stamped with a restriction, according to Rental819 (www.rental819.com/english), depending on the country or region where they are issued. The National Police Agency’s official response to the question was, “To ride a motorcycle in Japan with an international license, there are no limitations regarding engine displacements.”

That said, if you’ve only ridden small motorcycles in your home country, riding a big one, especially in a foreign country with different traffic rules, can be dangerous. Please take this into account when renting your bike.

Tatsuma Kasama is a Japanese-born motorbikaholic. A high school encounter with the 1969 American road movie “Easy Rider” changed his life, as he fell head over heels in love with the motorcycles driven by the hippie protagonists played by Peter Fonda and Dennis Hopper. His own past races were a Yamaha Jog-Z, Yamaha DragStar Classic 400, Kawasaki Zephyr 400 and Harley-Davidson Street Bob. He is now the proud single father of a Harley-Davidson Fat Boy 114.

I’d love to answer any questions you may have about riding motorcycles in Japan and would love to hear your own experiences on the two-wheeled tours you’ve done here. If you don’t mind being mentioned in future articles, please let us know your thoughts via the contact form: