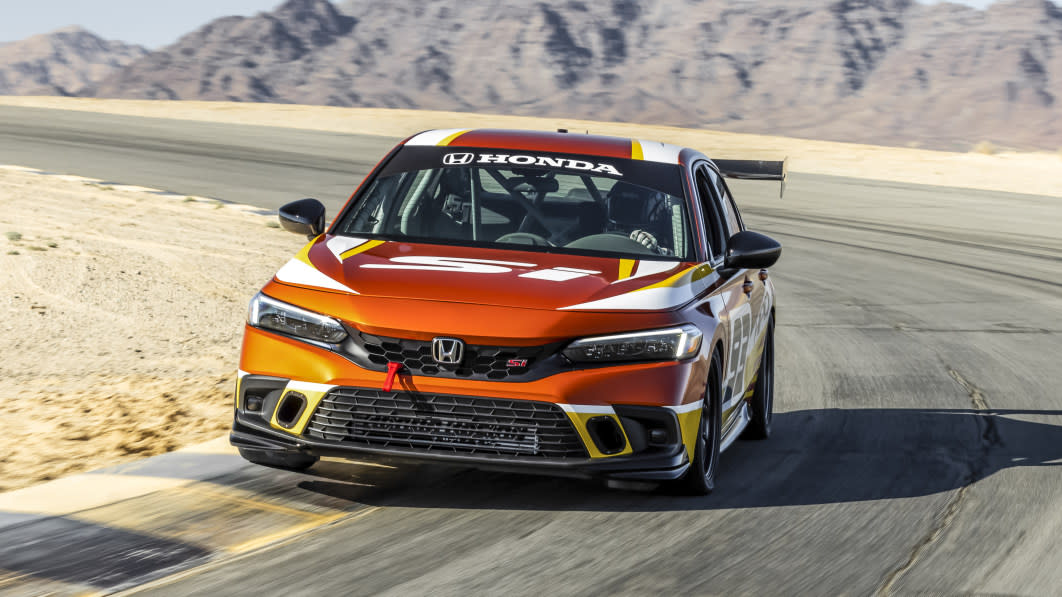 SEMA is just around the corner and Honda announced on Tuesday that it will offer a little something for everyone this year, including two- and four-wheel overlanding enthusiasts, performance junkies and those who just want to bring their own touch to their daily means of transportation. We’ll start with a pair of Civic Si-based race cars.

The HPD Si race car is essentially an original powertrain and body stripped of unnecessary elements and improved in all four corners, but not under the hood. That means its 1.5-liter engine produces the same 200 horsepower and 192 pound-feet you’ll get in the Civic Si streetcar, with just a little less weight to haul.

This Si-based race car was built to take on the National Auto Sports Association (NASA) 25 Hours of Thunderhill. Its safety equipment meets FIA specs, and the race car packs a little more oomph than the stock – 220 hp and 240 lb-ft of torque. The Honda Research-West team has been running on behalf of street performance development since 1996.

Want to build your own time machine? Previously sold only to factory-backed racing efforts, this Civic Type-R crate engine is now available to everyone. The packages include the long block, the alternator, the turbocharger and the starter. A separate control set adds a preloaded HPD ECU with multiple tunes, an engine swap harness, and an accelerator pedal.

This five-door model is equipped with equipment from HPD and the normal range of Honda accessories. Front lip, rear spoiler and HPD emblem are from (shock) HPD; Honda logos, valve stem caps, wheels and roof racks are from Honda’s accessory line, and the roof box itself is from Thule.

The HPD Civic Si is similar to the Team Liquid effort, using only a sportier canvas. The front lip, side skirts, rear spoiler and HPD emblem are (again) from HPD; blackened items are all from genuine Honda accessories.

“The Honda Africa Twin is already perfectly suited for land adventures, thanks to its crisp, easy-to-use, dual-clutch shifting transmission that simplifies the riding experience, allowing riders to focus on the track ahead,” Honda said. We think it’s just a nice change of pace from the asphalt-related polished machines above. This version includes accessories from AltRider, Garmin and others.

Another showcase of Honda accessories is the TrailSport Rugged Roads Project 2.0. Roof cross bars, fender flares, cargo accessories, trailer hitch, and wheels all come from Honda Genuine Accessories, as do some of the smaller cosmetic items. The recovery hooks and skid plates are a unique custom from Honda’s R&D department, and the 1.5 inch riser courtesy of Jsport.

Last but not least, this Ridgeline build features a number of Honda’s accessory partners, with Jsport, Factor 55, Firestone and Maxtrax all registering with contributions. Thule gets credit for the rooftop tent and all of its accessories, and the Honda R&D team still gets credit for the skid plates and recovery points.

Honda will have its lineup at booth # 25077, in the southeast corner of the central hall at the SEMA Show in Las Vegas, which will take place this year from November 2-5.

A logging truck, a Jeep collide at Strong; three taken to Farmington hospital