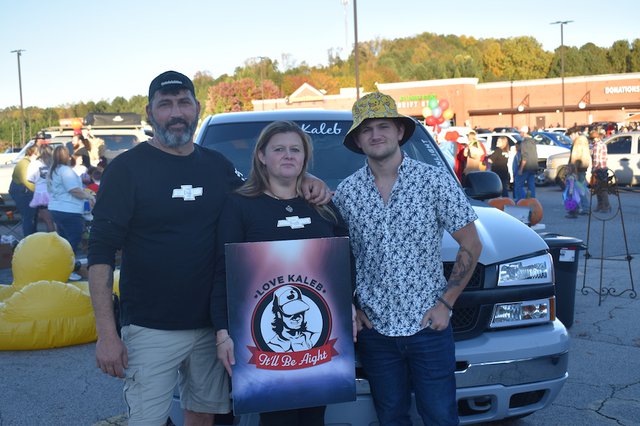 On the afternoon of October 31, friends and family of Kaleb Duckworth hosted and hosted a “Duck’s Truck and Treat” event in honor of the teenager who died in July.

The event, which ran from 4:30 p.m. to 7 p.m. on Halloween, featured dozens of decorated trucks and cars lined up in rows in the parking lot of Launch Trampoline Park, one of the places Kaleb Duckworth loved. spending time with his friends in their truck beds. In addition to the treats, the event also included free hot dogs, drinks, snow cones, cotton candy and funnel cakes.

Amanda Duckworth, mother of Kaleb Duckworth and one of the main organizers of the event, said the community response to the event has been overwhelming since the time she first posted the idea on social networks.

“People showed up and took over all the grilling so we could just enjoy it; there was so much love, ”said Amanda Duckworth. “And I think about 90 percent of the people here, I don’t know them; these are people who followed her story and just wanted to be there for Kaleb; they supported us through it all.

According to Amanda Duckworth, seeing the number of people who were touched by her son’s story, directly or indirectly, all gathered at the event was a moving experience for her and her family.

“Some of the nurses from STICU and the emergency room were there, even the 911 dispatcher who took the call, so a lot of the people who were with Kaleb that night got out,” Amanda Duckworth said. “So it’s been an emotional day, just to see a lot of people showing up for Kaleb.”

According to Kaleb’s father, Tommy Duckworth, hundreds of community members attended the event, even more than their families expected.

“We’re just amazed at the turnout,” said Tommy Duckworth. “We thought 700 hot dogs would be enough and we had enough drinks and stuff, but we ran out of everything and had to go buy more.”

Dozens of local individuals, groups and businesses contributed to the event by donating candy and other goodies, raffle gift baskets, hot dogs and drinks. According to Amanda Duckworth, they continued to receive donations until the day of the event.

“We had a lot of people show up and bring us stuff to raffle off,” said Amanda Duckworth. “Like even while we were here, they showed up with stuff from their business and brought it over and said ‘here, do you want to draw lots? “So that’s really cool.”

Amanda Duckworth said that she and her family recently formally formed a foundation, “Love Kaleb Inc.”, in honor of her son. Under the name of the foundation, they plan to contribute to the community in honor of Kaleb in order to keep his memory alive.

“We have her logo, her name and the motto of her foundation,” said Amanda Duckworth. “For Thanksgiving we’re adopting four families and having a whole Thanksgiving, for Christmas we’re going to adopt four families between Lumpkin and Dawson and buy their kids Christmas – and we’ll do truck shows and motorcycle rides and a lot of stuff in his memory.

The Truck and Treat event, said Amanda Duckworth, would have been something her son absolutely loved.

“He would love that – he would be right in the middle, probably dancing on one of those trucks,” Amanda Duckworth said. “Just everyone having fun, laughing and having fun, that’s what he loved.”