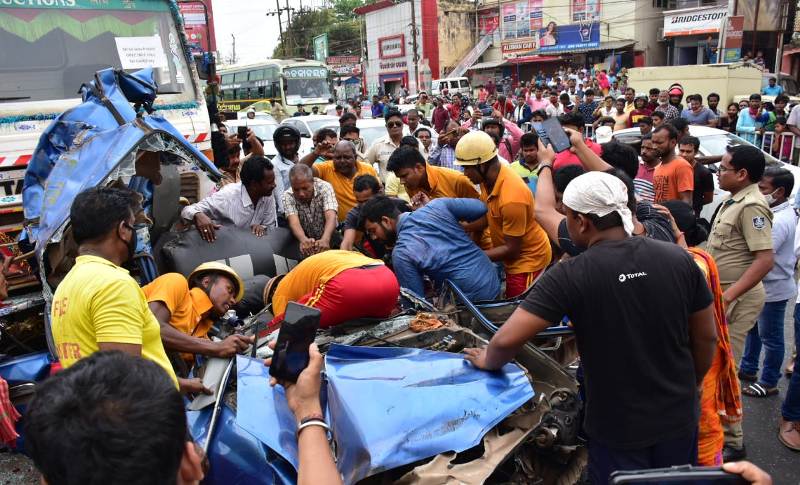 Bhubaneshwar: In a tragic road accident, a high-speed truck rammed up to three cars and a motorbike from behind in the Palasuni area on the NH-16 here Monday morning around 9.30am, killing the driver of a car on the spot and leaving three others seriously injured. hurt.

The incident happened below the boundaries of the Manchewar Police.

According to an eyewitness, the fatal and serial road accident took place in the morning as the truck and the four vehicles were heading towards Cuttack on the national road. The truck first hit a white colored car which luckily skidded off the road and was razed to the ground with partial damage.

The second unfortunate car had slowed down near a sign post to wait for the green light. As another truck was already stationary in front of the metallic light blue colored car at the signal post, it (the second car) crashed between the two trucks.

The driver of the second car died instantly and three occupants were seriously injured. The unfortunate vehicle was badly damaged, the eyewitness said.

The identity of those killed and injured has not yet been established.

Informed by some locals, the Manchewar police immediately went to the scene of the accident and rescued the injured. The three injured people were rushed to the capital hospital in Unit-6 in critical condition for medical treatment.

On the other hand, the driver of the high-speed truck managed to flee from the accident site shortly after the accident.

Manchewar Police have launched an investigation into the incident.

Furthermore, following the accident, vehicle traffic was interrupted for about an hour. Hundreds of vehicles remained stuck on both sides of the national highway until traffic was cleared.

Further details of the accident are awaited.