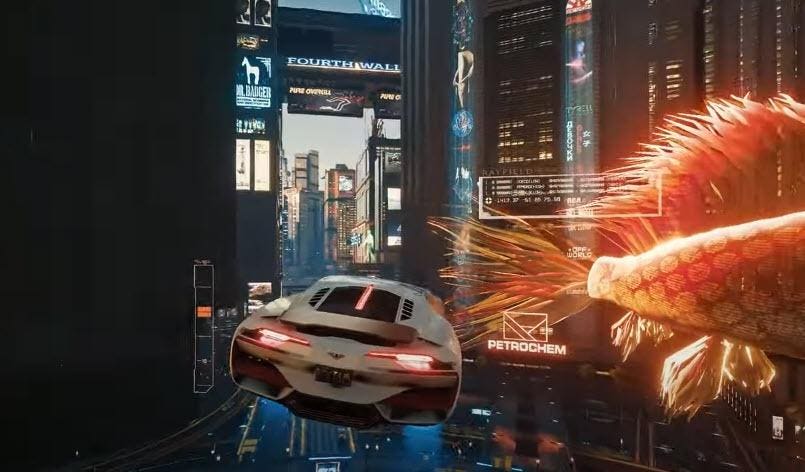 Of the many things missing from Cyberpunk 2077’s vision of the future, the inability to fly around the city in any type of vehicle seemed like a pretty big oversight. While there are a number of scripted sequences that will take you into hovering/flying aerial vehicles, players cannot pilot them, yet another thing a game like Grand Theft Auto has had for decades, that Cyberpunk 2077 did not include.

As always, the Cyberpunk 2077 modding community continues to be exceptionally talented, and now there’s a new flying cars mod called “Let There be Flight” that inserts hovercars into the game. Not just cars that can fly, but once they’ve been redesigned to have real thrusters, Blade Runner-like engine sounds, and custom controls for getting around.

You can see the mod in action below:

And you can download it here if you want to try it for yourself.

The mod was released just under two weeks ago and is continuously being improved. Plans are to expand the concept to more vehicles in the game.

I highly doubt that even with the next major DLC coming to Cyberpunk, we’ll see flying vehicles there. The game is very limited to cars and bikes, and its transportation options seem to have been something significantly reduced in scope by the time the game was released. There aren’t even NPC motorcycles, only the player can lead them. There’s also an unfinished rail system that ended up being finished and fleshed out by, you guessed it, modders.

I really like the flying car mod because it gives off extremely distinct Blade Runner 2049 vibes and doesn’t break the immersion considering it is a time period that has flying machines, we just can’t fly one of them ourselves in the game. Something to think about for the inevitable sequel I guess.

For now, I’m staying relatively independent of Cyberpunk until another major patch arrives or DLC marketing ramps up, which is supposed to happen before the end of the year. We’ll see what that brings, but the coolest additions may still end up being mods like this for a while.

Pick up my sci-fi novels Herokiller Series and The Earthborn Trilogy.