KITT’s replicas of â€œNightriderâ€ and the iconic 1977 Pontiac Trans Am from â€œSmokey and the Banditâ€ were presented at a press conference for Chrome & Ice on December 16. Photos by Ben Gagnon

FLINT – Iconic TV and movie vehicles will be among the top attractions at the 7th Annual Chrome & Ice Car Show in February.

Chrome & Ice, one of the Midwest’s largest winter auto shows, will be presented by Back to the Bricks at Dort Financial Center on February 11, 12 and 13. More than 125 cars will be on display during the three-day event, filling the two arenas of Dort’s financial center, as well as its mezzanine and lobby areas.

To celebrate its return, Chrome & Ice will feature a special TV and movie car theme in the lobby of the Dort Financial Center, featuring vehicle replicas of some of the most memorable shows and cinemas ever produced. The flagship cars will include KITT from the 1980s television series “Nightrider”; a 1977 Pontiac Trans Am from “Smokey and the Bandit”; a DeLorean from â€œBack to the Futureâ€; a 1966 Batmobile from the 1960s “Batman” television series; a 1984 Ferrari GTS of “Magnum PI”; a Ford Mustang GT from Steve McQueen’s hit “Bullitt” in 1968; and a 1904 Winton Flyer from the 1969 Steve McQueen film “The Reivers”. 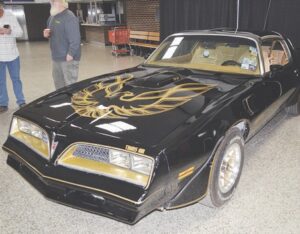 Original TV / movie cars will also be on display, including a 1969 Dodge Charger “General Lee” car from the “Dukes of Hazzard” TV series. Additionally, the exhibit will feature life-size statues of iconic movie characters and Marvel superheroes like Spiderman and Hulk.

Amber Taylor, Executive Director of Back to the Bricks, said the exhibit will feature something for everyone: moviegoers, classic car fans and parents who want to share a bit of nostalgia with their kids.

â€œI remember sitting on the couch watching ‘Nightrider’ with my dad,â€ Taylor said. â€œWe all had this story when we were kids, but now it’s our turn to share memories with our kids. I think it will get them excited about automotive history and our own automotive heritage right here in Genesee County. “

Brien Lord, owner of the KITT replica to be shown at Chrome & Ice, hopes kids will be impressed with the sleek black Trans Am Firebird from 1983, just like he was back then.

â€œI remember coming to a car show here (at the arena) as a kid in the ’80s and getting to see KITT,â€ he said. â€œIt was fun to turn around and build this car with my dad and have those memories. Now the kids can come and have a similar experience to what I had when they saw this car.

Motorcycle enthusiasts and bikers will also enjoy a display of classic motorcycles under the seating area of â€‹â€‹the main arena of the Dort Financial Center.

Other attractions will include the VIP Experience from 6 p.m. to 8 p.m. on February 11, the proceeds of which will be donated to the Scholarship Fund.

By popular demand, the ARTOMOTIVE “Raise The Hood” art competition is back, open to local artists who wish to show off their skills in transforming an ordinary car hood into a work of art. The car hoods will be showcased at Chrome & Ice and voted on by the public, with prizes awarded on February 13.

The 25 best prizes for the best show will close the show after the announcement of the ARTOMOTIVE winners at 3 p.m. This year, the top 25 winners will receive a collectible neon clock valued at $ 250.

In addition to showcasing world-class vehicles, the Dort Financial Center mezzanine will feature more than 40 vendors representing suppliers of vehicle parts and accessories.

For more information on Chrome & Ice or to purchase tickets, visit www.backtothebricks.org.