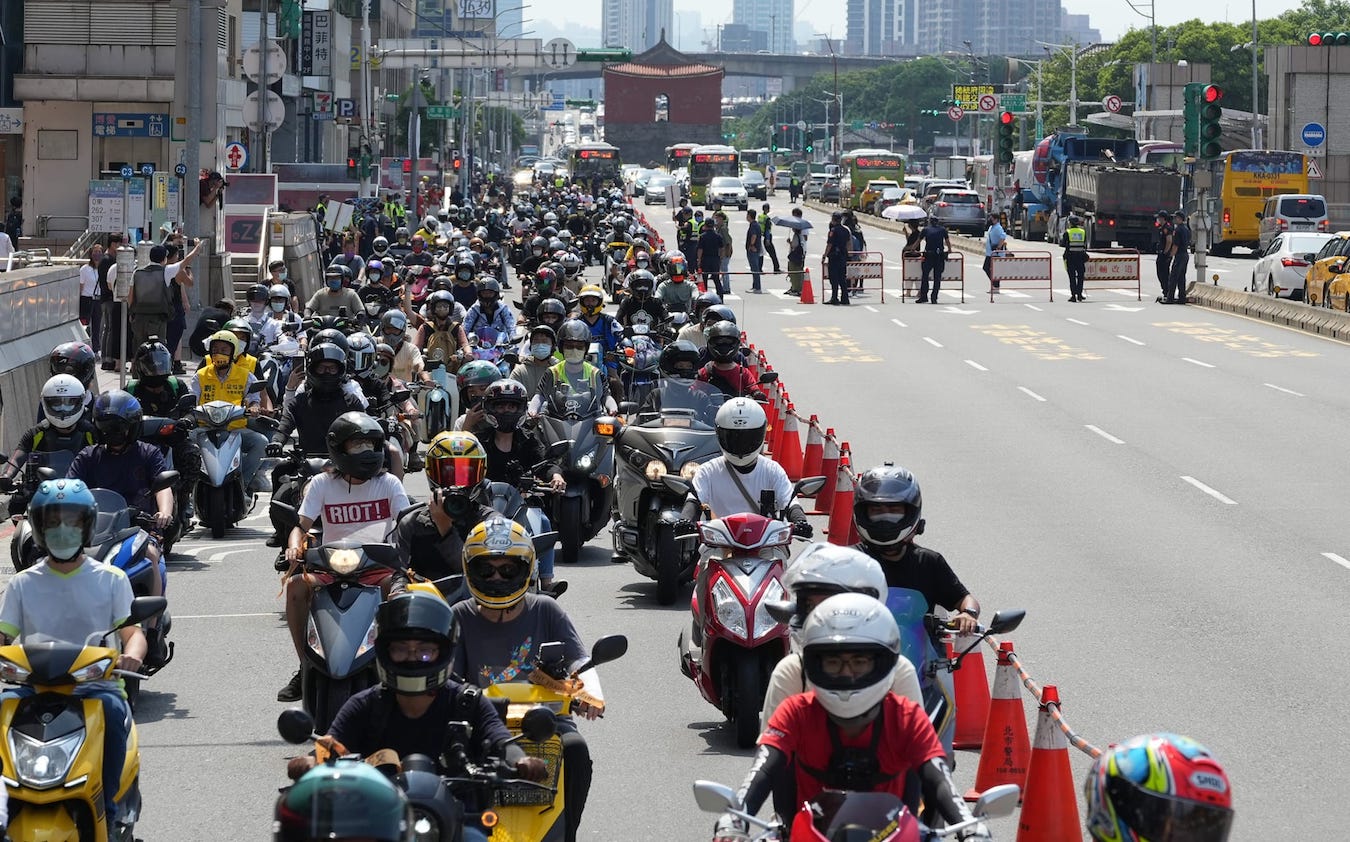 Bikers and scooters mobilized last weekend against the regulations in force

5,000 MOTORBIKES and scooter riders demonstrated last weekend on Ketagalan Boulevard for a rally organized by the Formosa Motorcycle Rights Association. The runners congregated at Taipei Expo Park on July 9 before heading to Ketagalan Boulevard, where they held a rally. Other counts have the number of rally participants as closer to 3,000.

It was not the first such protest to occur, with protests calling for the relaxation of current restrictions on motorbikes and scooters in recent years. According to protesters, there are eight million cars in Taiwan, but 14 million scooters and motorcycles. Nonetheless, protesters say current laws favor cars over scooters and motorbikes in ways that are not only dangerous but also inconvenient, pointing to the 3,000 deaths that occur each year due to collisions.

In particular, the protesters criticize the laws and regulations governing scooters and motorcyclists which they consider to be outdated. This includes requiring scooter and motorcycle riders to perform a two-step turn when turning left.

Protesters also called for the abolition of no-scooter lanes, as the restriction of many roads for single causes instead forces scooters and motorbikes to travel in pedestrian lanes, which can lead to accidents. To this extent, motorcyclists and scooter riders have criticized that motorcycles and scooters are not allowed on provincial highways, as well as major thoroughfares in Taipei and other cities, such as Zhongxiao West Road.

The Formosa Motorcycle Rights Association called the issue “martial law on the road.” The organization believes that officials in the Department of Transport and Communications are out of touch with the times and that key decisions on transport regulation were taken by small interest groups within government. The association also criticized the fact that in accidents motorbike or scooter drivers are usually charged by the police even when they are not at fault.

That being said, there have been some attempts to ease the current restrictions, including that motorcycles over 250 cubic centimeters must be allowed on the Suhua Expressway from last month, after a six-month trial period. which ended in March.

Youth-focused political parties have generally backed these demands in recent years, with members of the New Power Party and Green Party taking part in the rally. Delivery workers’ unions were also present at the rally, as many delivery workers drive scooters and are affected by road safety rules.

Last week’s rally was preceded by a demonstration by representatives of 30 groups in front of the Ministry of Transport and Communications on July 1. Besides motorcyclists and scooters, this included drone operators and water sports enthusiasts.

It remains to be seen whether protests by these groups gain traction, especially since drone operators and water sports enthusiasts are a minority. These groups, which are often youth-led, may view current regulations as obscure and arbitrary within bureaucratic authority, as linked to attitudes that date back to authoritarian governance. And despite the demographic importance of motorcyclists and scooters in Taiwan, that hasn’t led the Tsai administration to promise changes after the protests either. Although current regulations have been criticized as contributing to road safety problems in Taiwan, leading to fatalities, for example, this is often accepted as a fact of life rather than a problem requiring repair. It remains to be seen if that changes.

1 dead when a motorcycle collides with a car; Harley-Davidson driver charged with…