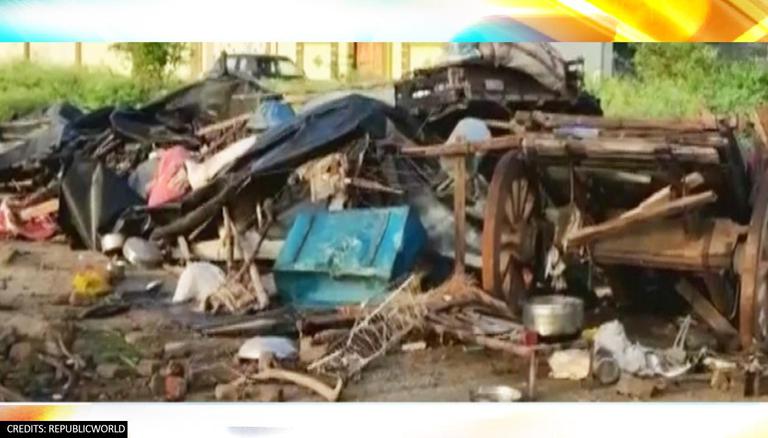 8 killed after truck crashed into hut, CM Rupani announces Rs 4L as a courtesy for loved ones

Eight people were killed on Monday when a truck hit a hut in Badhada village in Amreli district in Gujarat. Two others were seriously injured.

Amreli Police Superintendent Nirlipt Rai said those who died included two children aged 8 and 13. Two minors were also seriously injured. The official informed that the truck was traveling from Rajkot to Jafrabad in Amreli when the accident happened at 2:30 am.

The Chief Minister of Gujarat, Vijay Rupani, expressed his sadness and announced a Rs 4 lakh as a courtesy for the family members of the victims. The accident occurred after the driver dozed off and lost control of the truck, which had been modified to serve as a crane.

Chief Minister Rupani tweeted informing that hospital authorities have been tasked with providing the best possible treatment to those injured in the crash. The chief minister also asked the authorities in Amreili to immediately investigate the case and prepare a report.

“I am saddened by the tragic accident which took place near the village of Barda in Savarkundla of Amreli district. The system has been given full instructions to provide immediate and appropriate assistance to the victims of the accident. The government of the state will provide aid of Rs 4 lakh to the families of each of the victims of the accident, “CM Vijay Rupani tweeted.

In the following tweet, he added: “The collector of Amreli was tasked with immediately investigating the whole incident and sending a report. I pray that the Lord will bring comfort to the souls of the dead and give the family the strength to endure this suffering “

A total of 10 people were sleeping along the road when the crash occurred, leaving eight dead and two seriously injured.

A series of tragedies for Amreli

The current tragedy comes barely a week after a couple and their two-year-old son were killed when their motorcycle was hit by a high-speed truck in Amreli.

In another incident on July 20, four family members died instantly after the vehicle they were traveling in was struck by a truck in the village of Babapur under Amreli Taluka on the Amreli-Bagasara road. The incident had taken place on the outskirts of the town of Rajula.