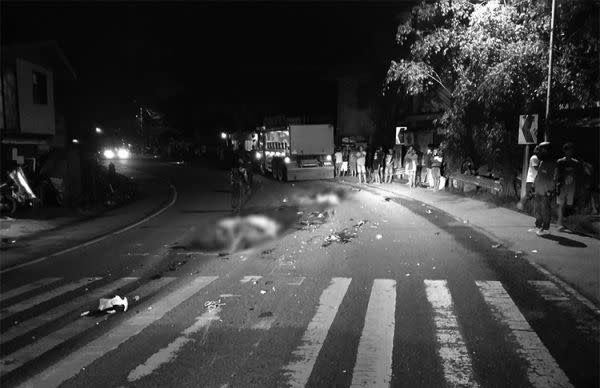 (UPDATE) TWO construction workers were killed in a collision between a 10-wheeler dump truck and a motorcycle in Barangay Lutac, Naga C⁪ity, Cebu at 10:55 p.m. on Tuesday, January 11, 2022.

The dead have been identified as Floyd Basillote, 26, a man of steel and motorbike driver, of Barangay Cabiangon, Pinamungahan, Cebu, and his back who is also his neighbor, Winston dela Rama, 28.

Both died instantly after being hit by the dump truck (NAW 9797) driven by Roland Tapic Alferez, of Barangay Pangdan, Naga City.

Alferez was detained at the Naga City police station shortly after the incident on Tuesday evening, but was later released at noon yesterday after the victims’ family decided not to press charges against him as they still have to deal with deaths.

In an interview with Sunstar Superbalita, Sgt. Aristeo Tampus of the Naga Traffic Police Division said the victims were intoxicated during the incident.

Basillote’s brother told police that the victims were going to Minglanilla to look for food because they were hungry.

Basillote was maneuvering on a curved part of the road at Barangay Lutac but was unable to return to his lane and instead collided with the dump truck.

The dump truck was on its way to Toledo City to deliver sand. (LPG, TPT)