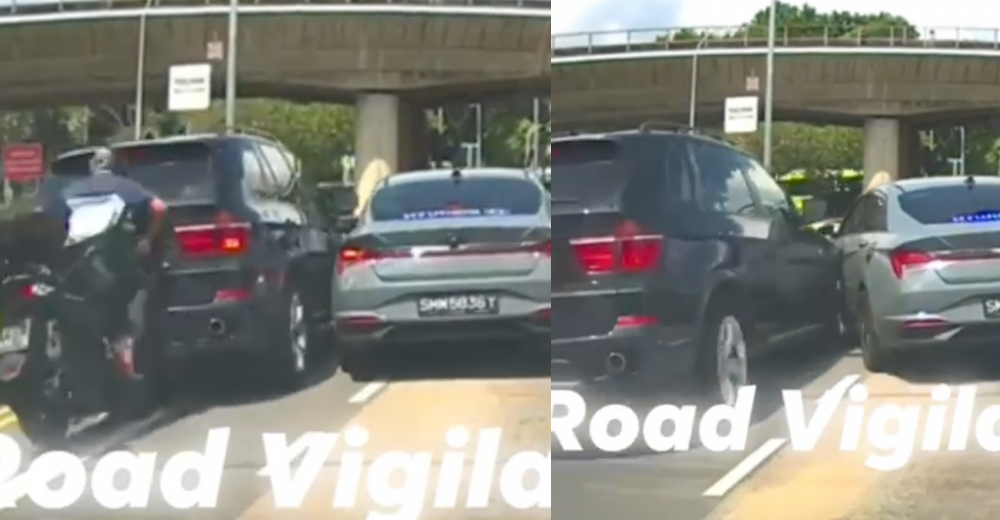 Follow us on Telegram for the latest updates: https://t.me/mothershipsg

Video of the incident was posted on SG Road Vigilante’s Facebook page on December 9.

A Hyundai was seen signaling and passing into the left lane when a straight-driving BMW struck it.

After a collision, both drivers locked their brakes. When they came to a stop, a motorbike from behind drove straight into the back of the BMW.

The impact caused the trunk to detach from the motorcycle, striking the rider on the back of the head.

Fortunately, he was wearing his helmet.

The motorcycle then started to fall on its side. The rider got off his bike before it touched the ground.

He then approached the pilots in front of him.

Netizens in the comments section were debating which motorist was in the wrong.

One said it was the BMW driver because they didn’t slow down to give way to the Hyundai. A few other comments agreed.

While another criticized the Hyundai driver for allegedly “stopping” instead of accelerating after moving to the next lane.

A commentator added that it is the Hyundai driver’s responsibility to make sure they are safe before setting off.

“How can you expect other cars to stop just because you motioned to change lanes or to start? “

Others sympathized with the motorcyclist as well, with one saying, “Poor biker just blinded by the BMW.”

But, a surfer replied that the biker was following the BMW very closely and that it “served him well”.

Singapore Police (SPF) said Mothership that on December 9 at around 12:10 p.m., police were alerted to an accident involving two cars and a motorcycle along Ang Mo Kio 1 Avenue towards Upper Thomson Road.

A 39-year-old motorcyclist was conscious when he was taken to hospital.

Hydrogen cars: how Toyota wants to relaunch the hydrogen burner